Today marks the beginning of National Hurricane Preparedness Week. Just because Rowan County isn't along the coast. That doesn't mean we can't experience life threatening impacts from Hurricanes. Evaluate what you need to do to protect your home and family NOW, before the first storm even forms!

Find out today what types of wind and water hazards could happen where you live, and then start preparing how to handle them. Hurricanes are not just a coastal problem. Their impacts can be felt hundreds of miles inland, and significant impacts can occur without it being a major hurricane. 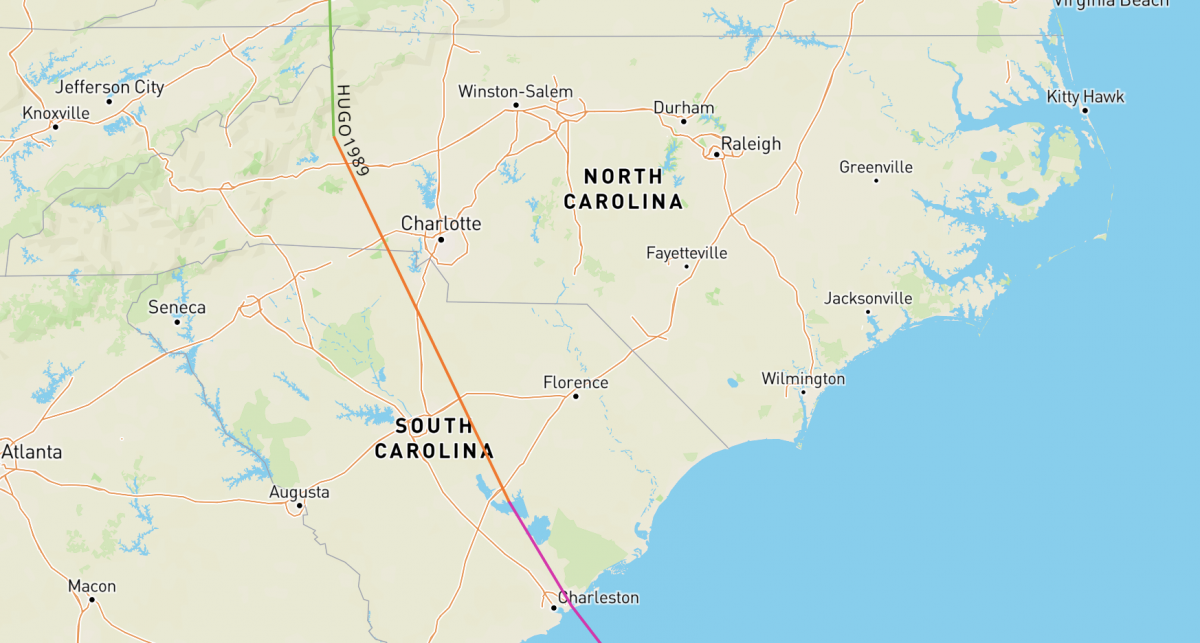 I remember as a 14 year old teenage boy this storm being the reason I developed a love for weather. The impacts from this storm were life changing for me and so many others for various reasons. The weather in the area on Sept. 21, 1989 – a Thursday – fed the false sense of calm. It was sunny and unseasonably warm, in the upper 80's. I remember hanging out with a few of my childhood friends talking about how it seemed so odd a Hurricane may be coming with the weather being as nice as it was. Clouds began to arrive during the evening commute, and as area television stations were full of reports of hurricane-force winds approaching Charleston, some in Rowan County began to show concern.

Area school systems cancelled school to keep students, faculty and buses off the roads. Businesses had closed early in some cases due to concern for downed trees and power lines making travel difficult. The power of a rare Charlotte hurricane became starkly clear in the early morning hours of Sept. 22,

Pushed along by the clockwise circulation of a high-pressure system near Bermuda and the counterclockwise flow of low pressure in the Mississippi Valley, Hurricane Hugo rushed inland after making landfall north of Charleston with 138 mph sustained winds. People huddled in shelters along the coast had to climb to the rafters to avoid drowning in a 20-foot storm surge.

Hugo moved inexorably to the northwest. It pounded the South Carolina cities of Sumter, Camden and then Lancaster. By 4 a.m.., it was Rowan County's turn.

Across the county, the relentless winds toppled giant oaks, pines and everything else. Transformers exploded, and the power went out in neighborhood after neighborhood.

Television and radio stations were knocked off the air by the storm.

By 9 a.m.., the winds abated in Rowan County. Hugo kept rolling, however, racing to the northwest at 25 mph with tropical storm-force winds. It downed trees and knocked out power in the North Carolina foothills and mountains, and then into Virginia and West Virginia.

Back in Rowan County and the Charlotte metro area, the cleanup began. Nearly 700,000 Duke Energy customers were without power, and it would be three weeks before the last repairs were made. Countless roads were blocked by trees, and area residents didn’t wait for government agencies. They grabbed chain saws and began clearing roads, driveways and yards.

They cooked food from their refrigerators and freezers on charcoal grills, to prevent it from spoiling. They hauled pieces of trees into the street and waited for trucks to pick them up – a task that wasn’t completed until early November in some places. And they waited for the power to come on.

The official death toll is listed as 13 in South Carolina and six in North Carolina, but there were between one dozen and two dozen additional deaths in the days afterward.

Obviously technology has changed a lot since 1989. We have more advanced radar. Emergency Management and Meteorologist are working more closely together. Our model data is more accurate and dependable. That doesn't mean you don't need to stay weather aware and prepare. In the coming days for Hurricane Preparedness Week I will provide you with various information for Developing an evacuation place, Creating a disaster supply kit. Getting an insurance checkup, Strengthening your home, Helping your neighbors & Completing a written plan.

Be sure to check back daily this week for these important topics. As always thank you for following Rowan County Weather!

Check back often for important announcements and events that I'll be involved in!